Direction: I will make a lengthy campaign entitled "Resilience Rising", modeled after Blizzard-like build-and-destroy missions and commando missions reminiscent of Aeon of the Hawk and Flame Knives. This campaign will be at least ten playable missions and a cinematic epilogue, and may be extended to support additional missions. Resilience Rising will be fully-voiced, with custom units, unit graphics, and portraits thrown in as additional content. Not all of this content will be original work by me, and I will cite such examples in the credits of the epilogue. I intend on including a myriad of music tracks -- again, original works, or otherwise -- and will cite the contributing artists/groups for their works.

Resilience Rising revolves around a trio of Protoss brethren, one of which who has attained the fictional military rank of "Resiliator". A Resiliator acts as a field commander and holds similar responsibilities to a marshall, such as Jim Raynor. The other two characters are also of fictional ranks, and all three will make physical appearances in every mission, with very few exceptions. The Resiliator and his battle brothers will embark on a quest to return Aiur to its former glory, shortly after the death of the Overmind. With much of the Protoss forces having retreated to Shakuras, their journey will be extremely difficult, taxing, and painful. Every character, including minor characters, will make sacrifices for their own cause, but none will sacrifice more than the three protagonists.

A taste of what is to come: 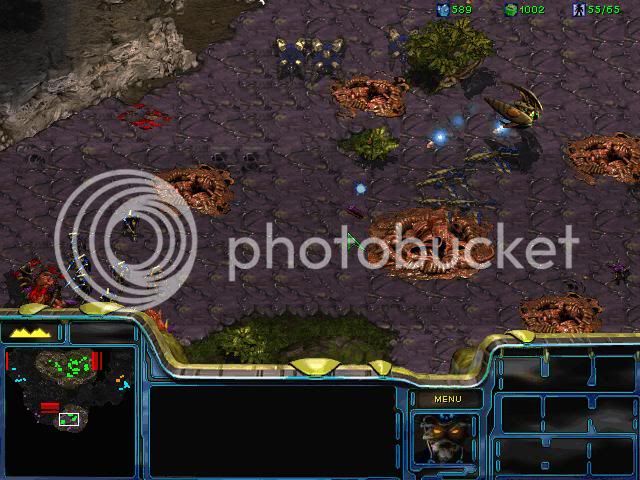 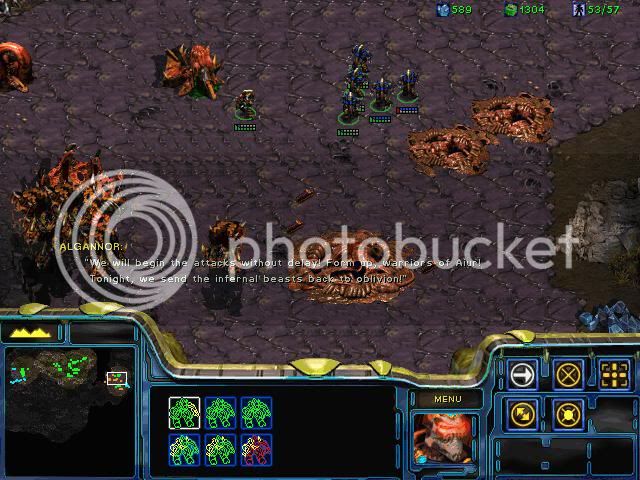 A powerful and strong-willed Zealot who has attained the rank of Resiliator, Algannor represents loyalty to reason and to the Protoss people of Aiur. He fights to save his brothers, no questions asked, and looks up to Vice-regent Tanuderal for being a stalwart defender of what the Protoss truly stand for. His values lay with the Protoss, not the failed Conclave.

An adept psion and experienced tactician, Vice-regent Tanuderal is a well-known defender of Aiur's people and seeks to save the dying planet from the Zerg menace and infestation. He witnessed Tassadar's sacrifice to destroy the Overmind and vowed to continue in the templar's footsteps -- Tanuderal, however, has a strong dislike for Dark Templar, for reasons that will be revealed as the story progresses...

Ultor comes from an organisation of long-lasting Conclave members, and holds similar respects and values, as such. He resents the disrespect that many Protoss now levy against the Conclave and often defends their practises and traditions, despite their retreat from Aiur. He supports Tanuderal and Algannor in their quest to restore Aiur's prosperity, but most of his support is underlined with cynical remarks.

The powerful Archon that resulted at the joining of two First Templar, Kreelak/Fadonnis is the commander-in-chief of the Carrier Armageddon, which is distinguishable from normal Carriers by the extra armour. He is a valuable asset to the Protoss, simultaneously being a great leader and an experienced and zealous warrior. Kreelak/Fadonnis is a powerful psion that relishes battle and wishes nothing more than to annihilate all Zerg presence on Aiur.

A Dark Templar whose allegiances are hard to pinpoint, Sylar is a relatively-unknown and incredibly-secretive warrior. Those who don't know him well have attacked him, levying accusations of treason against both the Dark Templar and the Protoss High Conclave, but neither cases of his would-be betrayal have much evidence behind them. He is a powerful assassin and warrior who prefers, like most of his kin, to strike from the shadows rather than directly confront the enemy. Sylar's ability to use the void's energies to destroy Cerebrates permanently may become invaluable to the Protoss of Aiur, should they encounter such a creature.

Skultor is the physical manifestation of Cerebrate Esilyr, a notoriously-aggressive brood leader. Skultor's sentience is a powerful threat to Aiur's defenders, as it means that the leader of an entire Zerg brood is not stationary and can indeed fight back. His abilities are dangerous and his intelligence is cunning and malevolent, and Skultor shows no signs of being merciful to the Protoss unlucky enough to be caught in his snare. His goal is to finish what the Overmind started -- eradicate the Protoss on Aiur, and integrate the refugees hiding on Shakuras into the Zerg Swarm.

A creature of an unknown origin with an unknown purpose. The Mysterious Being has never physically intervened with any events of the universe, so its power is dubious and enigmatic, but this entity indeed expresses an intelligent comprehension of the recent events of Aiur, and of Protoss history in general. Few in the Koprulu Sector know of its existence, and fewer still acknowledge it as something that truly exists. Perhaps more of its motives and goals will be exposed as the story progresses.
More updates coming soon...
Last edited by Pr0nogo on Sat Feb 11, 2012 7:23 pm, edited 7 times in total.
Top

Approved, and thanks for your submission.
Top

About the archon narrators at the start, I think it's a good thing that they speak slowly and take their time to introduce the story. I'm sick of campaigns where you can't keep up with the speech and the lines disappear before you can read them.

The bit with the three Scouts looks very reminescent of Vile Egression. Maybe you were possessed by the spirit of Laconius when you decided to include it?

New briefing video is up. Here's some character bios. More may or may not be coming.

Thanks! Took a bit of experimentation and alpha channeling. I'm glad it worked out how it did.


HelpMe wrote:About the archon narrators at the start, I think it's a good thing that they speak slowly and take their time to introduce the story. I'm sick of campaigns where you can't keep up with the speech and the lines disappear before you can read them.

I know how annoying that is from experience, so I figured I'd remove any and all possibility of that occurring with my campaign. Glad it worked!


HelpMe wrote:The bit with the three Scouts looks very reminescent of Vile Egression. Maybe you were possessed by the spirit of Laconius when you decided to include it?

Well, if people are reminded of Vile Egression because of something I made, it must be good! Haha. I myself do see a lot of inspiration taken from the Vile Egression briefing, but I think it's a bit more unique, or at least, has my own little twist to it.

I've always liked going back tp Auir after it fell to the Zerg. Sounds interesting so far, Pr0nogo, looking forward to playing it.
Top

Very good briefing, I'd say. Looking forward to more stuff.
Ultor is a neat character, he's my favourite so far. Tanuderal is cool, but kinda creepy, too! I like the portraits.
Show us more maps soon. SOON
StarCraft Fan Campaign Listing
Top

Thalraxal wrote:I've always liked going back tp Auir after it fell to the Zerg. Sounds interesting so far, Pr0nogo, looking forward to playing it.

Thanks, man! Attempting to reclaim Aiur is a concept that's been done before (most notably, Reclamation of Aiur, lol). However, my campaign takes place just a month after Tassadar's death, so the premise is a bit different and I feel like it's expandable and open to a lot of interpretation and creativity.

Jim_Raynor wrote:Very good briefing, I'd say. Looking forward to more stuff.
Ultor is a neat character, he's my favourite so far. Tanuderal is cool, but kinda creepy, too! I like the portraits.
Show us more maps soon. SOON

Thanks for the positive feedback so far, everybuddy, and if anyone has any questions, comments, suggestions, or complaints, feel free to voice them here!

I assume tandem-posting and combo-posting is allowed here, so I'll give you guys an update.

A new music track is up in the OP!
The first map is almost complete. When my testers get back to me, I'll finalise it, do a final bug-test myself, and begin the second map. This is really good progress for me.
Voice acting is going very well, as always, and there are no bugs in the mod as of now. I intend on adding new units in, so that may change, but I have plenty of time to sort that out.

I will post another set of screenshots soon.
Top

Updated the second track, "Rising". It's in the OP.

Still hard at work, as I will be with the rest of the time I have to produce Resilience Rising.

Updated the third track, "Victory at Hand". It now has proper rain effect timing. Nothing else has changed.

Four more screenshots have been added.

The OP has been re-organised.

Second mission is well on its way to being completed, and will feature a hefty amount of extended terrain to set the scene. Screenshots will arise sooner or later, and the speed with which the project will be completed shall increase as my school year winds down.

This is NOT, by the way, February's monthly update. The main update will be much more impressive, with a good amount of screenshots, and (most likely) a gameplay video of mission two.

Let me know what you guys think!
Top

Four new screenshots have been added. Several more updates will arrive within the month.
Top

Y'know, I like the pace you work, it's pretty consistent. Yet another reason for me to envy you.

At this point you've probably realized that comparisons between this and VE are somewhat inevitable. I'll say this, though: I do think your dialogue is a bit more pleasing, from what I've seen so far. As much as I loved VE, a lot of times I felt it was needlessly verbose and overwrought. I suppose you must walk a thin line in this issue, to make the Protoss sound authentic without overdoing it.

HelpMe wrote:As much as I loved VE, a lot of times I felt it was needlessly verbose and overwrought.

Yes, this is a nice trip down memory lane.

From three weeks remaining in the last contest...
The stress of seeing the clock tick away, coupled with the dementia from lack of sleep- It was like writing my own language with random words plucked out of the thesaurus. It only made sense to me because of how delusional I'd become.

When my mental state was restored about a month after the contest, I went back to take a look and thought the exact same thing. I personally don't understand half the shit the dudes are saying anymore, lewl.
Ours is a thought-tormented age.
Top

So, this past Valentine's Day, I received this card in the mail.

Glad to see Jennifer is still checking up on me. We haven't been together since I got enlisted back on Char. Hopefully, she hasn't nested with anyone else yet.

However, since I have to have some fun, too, I am heading to a metal concert this afternoon. I decided to make this image as the 'do whatever you want as long as it's school appropriate' assignment in my Digital Images class.

Hopefully, after my recovery this Saturday and the role-playing session this coming Sunday, I'll be able to pump out a lot more Resilience Rising content for you guys.

Till then!
Top
Locked
39 posts