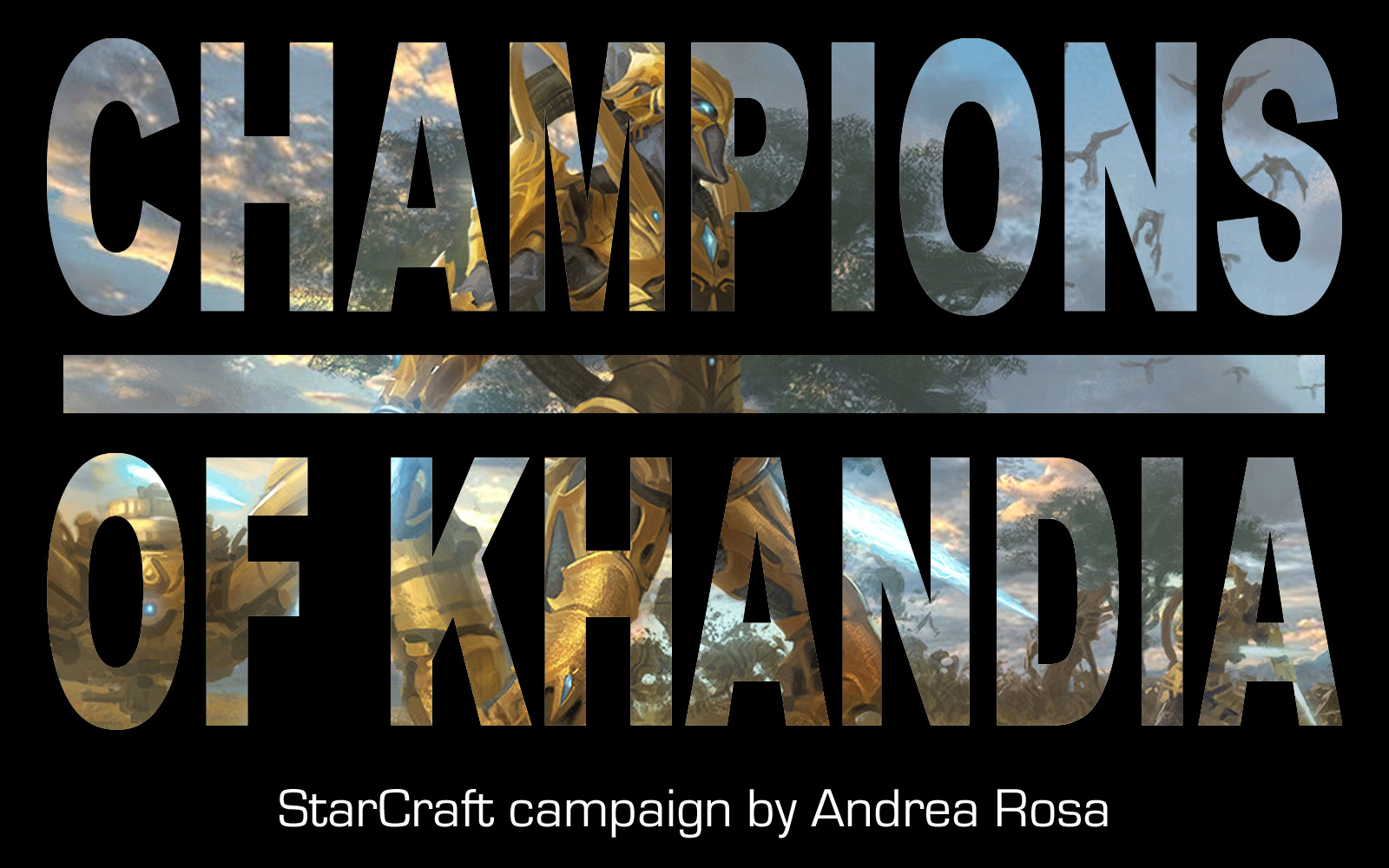 Very far from Antioch, west of the archaic sea of Kna-Tari, lies the province of Khandia. Homeland of the Furinax Tribe, Khandia is renowned for its industrious people, mainly builders, artisans and weaponsmiths who revel in their progressive crafts, their greatest feats being the power suits wielded by Zealots and the Dragoon exoskeleton. Scientific research, logic and skepticism characterize the lifestyle of the Furinax, and their sheer ingenuity has become proverbial. Suddenly, an ominous sound penetrates the placid waves of Kna-Tari: the Zerg, fierce creatures intent on conquering Aiur, attack in force. Led by Cerebrate Gorn, just revived after his temporary death in Scion, the Zerg proceed to lay waste to the whole province. Now Khandia is on the brink of total annihilation, and it's up to you to restore hope in your people. Acting as the local Executor, and fully aware of the fact that receiving any help from other provinces will be nearly impossible, you strive to rally the remaining warriors and plan a counter offensive against the evil that changed the winds and wronged the tides. You will need to be extremely careful, because not only the revenant Gorn is one of the highest ranking Cerebrates in the Swarm's ranks, but he also has yet to reveal his deadliest servant.


IMPORTANT NOTE: This campaign was designed to be played with the original StarCraft patched to version 1.04 or later (it will not work with the retail version). While it is technically possible to play these maps in Brood War mode, this is considered cheating, since the extra units and technologies would severely alter the gameplay, making some of the missions too easy. If you have Brood War, please play "Champions of Khandia" in StarCraft mode. Also, this campaign has not been tested under StarCraft Remastered.


I hope you'll enjoy these missions. As always, thanks in advance for any comment!
It is very unlikely that artificial intelligence will come out of natural stupidity.
Top

Mission 1: Fixed the name of the special Reaver, incorrectly displayed as Warbringer.

Mission 5: Removed a superfluous line of dialogue.
It is very unlikely that artificial intelligence will come out of natural stupidity.
Top

Mission 6: Fixed a nasty bug (that I thought I had already fixed during early testing) related to the appearance of Nydus Worms. On some occasions, the "unit unplaceable" error message was displayed. I think the bug has been fixed for good now, and should no longer resurface.
It is very unlikely that artificial intelligence will come out of natural stupidity.
Top

- Mission 2: Fixed typo in the dialogues (thanks to StalwartGhostess @SEN for reporting it to me).

- Mission 6: The pathfinding of the rogue Reavers has been improved. They will also come in close formation most of the times, although they will still spread if they cross a group of Zerg units along their tortuous path.
It is very unlikely that artificial intelligence will come out of natural stupidity.
Top

IMPORTANT NOTICE: Upon revising the triggers of Mission 6, I've discovered that the bug fixed with the update of November 13 could also lead to the impossibility to win the mission. Therefore, if you have downloaded the campaign before November 13, then you should really re-download it. My sincere apologies for the inconvenience.
It is very unlikely that artificial intelligence will come out of natural stupidity.
Top
Post Reply
5 posts • Page 1 of 1