Flags in the Dust (StarCraft campaign)

Flags in the Dust (StarCraft campaign)

INITIAL TESTS INDICATE...
THAT YOU ARE ABOUT TO EXPERIENCE... 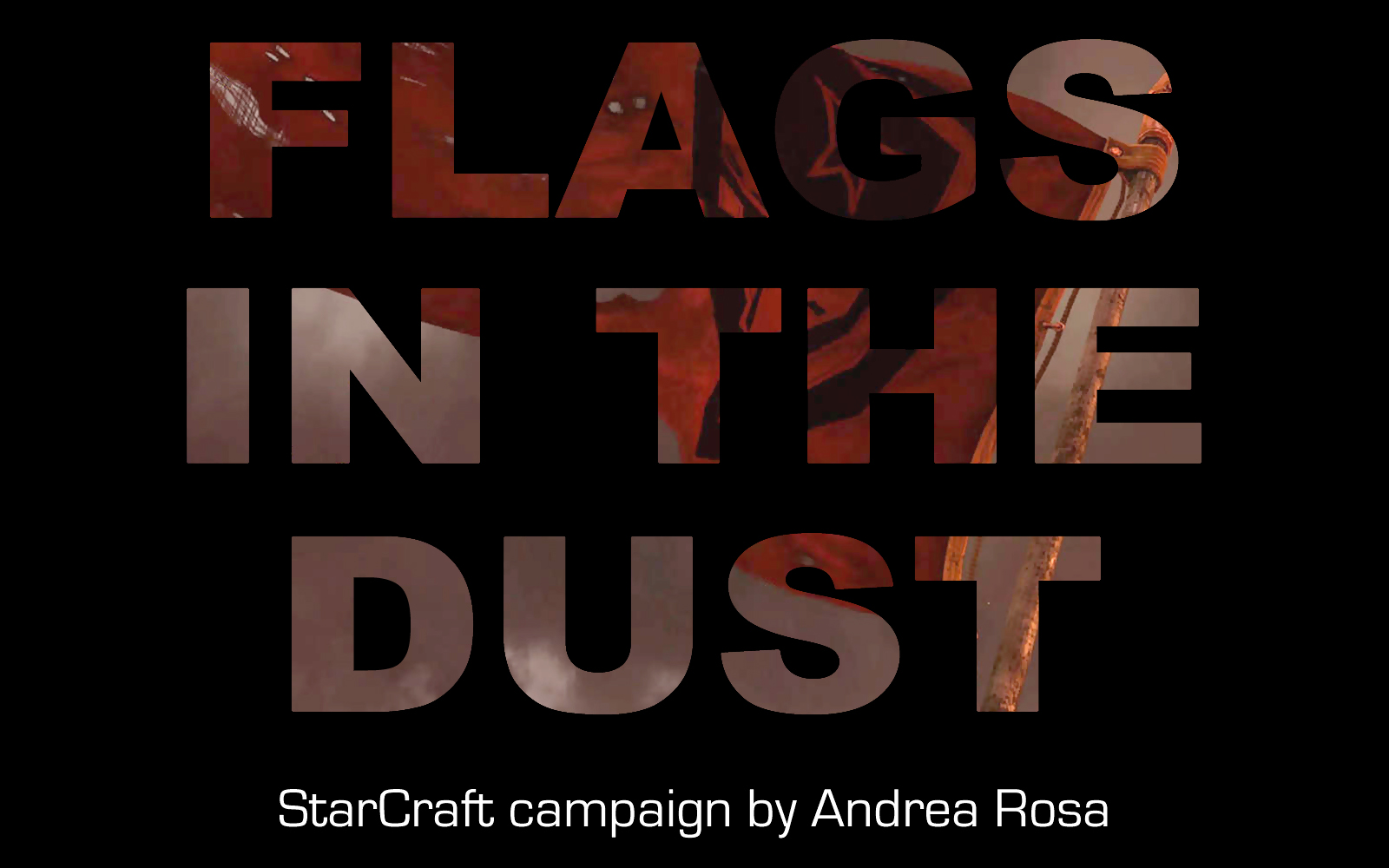 "For God's sake, Commander, I asked you to keep an eye
on Dr. Martens, not to indulge his own whims."
- General Edmund Duke

The time frame of Flags in the Dust is set immediately after the events narrated in Shadow of the Xel'Naga by Kevin J. Anderson and Rebecca Moesta (in other words, roughly after the fall of the Overmind and before the arrival of the UED Fleet). Reading the aforementioned novel is not a strict prerequisite for playing this campaign, since the shared narrative elements are summarized in the mission briefings.

A Wraith squadron roars high in the fierce sky above Augustgrad as you prepare to board a small interplanetary shuttlecraft. As a Dominion high-ranking official, you hoped for a better accommodation, maybe a suite in a Behemoth-class Battlecruiser, but apparently there isn't much traffic to and from Landorin. Shading your eyes against the glare, you watch the Wraith formation disappear behind the massive structures located in the core of the city, grab your hand luggage, and head for the shuttle hatch. Competent hands guide you into your small but comfy stateroom, where you will spend the next twenty hours, such is the time needed to reach the godforsaken Outer Colony of Landorin. Diligently, you take some time to review your assignments: your task is to oversee the scientific research program of Epsilon Squadron and give assistance to their chief of staff, Dr. Philip Martens. According to the files in your possession, the Doctor had relocated his Squadron to the outlying planet of Landorin after having suffered a catastrophic defeat on Char at the hands of the Zerg, as a result of which their armored divisions were completely wiped out - the fact that Epsilon Squadron had armored divisions in the first place had always sounded strange to you, after all weren't those guys supposed to do science? Your rationality had always kicked in, telling you the harsh truth: apart from the upscale civilian lifestyle, every kind of activity in the Koprulu Sector demands for a hefty backup of weapons, just in case. As for the Doctor, he was a curious anomaly within the Terran Dominion because of his Confederate past - but then again, the same was for General Duke. However, while Duke had been somewhat coerced in joining the cause of Korhal, it was rumored that Martens had been personally appointed by Emperor Mengsk, who insisted for the renowned scientist to maintain his position at the head of Epsilon Squadron. Go figure, politics will always be weird. You close your eyes and smile at this thought. Eventually, you nod off to the low hypnotic hum of the shuttlecraft. "Scientific research, test tubes, sticky and disgusting samples, high-ranking nerds... man, this is going to be boring as hell", you mutter to yourself before falling asleep, completely unaware of the nightmare that is about to unfold on Landorin.

Flags in the Dust was designed to be played with StarCraft 1.16.1: all visuals and text formatting are optimized for the native version. Compatibility with StarCraft Remastered is assured, even though some terrain features will not look as originally intended. It is very important to play this campaign in ORIGINAL mode, because the setting and gameplay mechanics don't call for Brood War units and technologies.

ADVANCED TERRAIN - A huge amount of work went into map design and tile editing, in order to craft natural-looking landscapes and visually-appealing spots: the stunning sights of Landorin will remain in your mind for a long time.
DIVERSE GAMEPLAY - Flags in the Dust encompasses many gameplay styles, ranging from classic RTS, to micromanagement, hybrid melee, survival, stealth, boss fights, and more. All of this in just six action-packed scenarios.
AN IMMERSIVE STORYLINE - In line with my previous campaigns, the storyline is consistent with the SCBW canon, while still presenting original elements and nods to popular culture, with an emphasis on character portrayal, interaction and development. Engaging mission objectives both integrate and define the storyline, giving each scenario a unique feeling.
CHALLENGING BATTLES - Standard AI scripts, combined with variable, multi-layered forced attacks and scripted events, attack relentlessly, testing your reaction time, accuracy and adaptability. Blindly charging ahead will often result in disaster, as you are required to devise the appropriate strategy for each fight.