by RazorclawX
And not in the good way.

I feel so bad for that presenter at Blizzcon for trying to sell something nobody asked for.

by Hercanic
The PC audience is not the mobile audience. A big BlizzCon reveal for a mobile game of a beloved PC franchise, where most of the audience is of the PC demographic, is certainly not going to go over well. Plenty of other developers have learned and talked about this negative reaction if you follow GDC talks about multi-platform releases. Blizzard needed to reveal this online, outside of BlizzCon, if they didn't have anything cool for the PC Diablo crowd to pair with it. Instead they made an already under-served audience feel further abandoned, disappointed, and apprehensive about rampant micro-transactions.

Just because we have phones doesn't mean we like to game on them.

by UntamedLoli
They really had to have been blind if they didn't expect this kind of reaction. Just like what the guy in the video brought up. The way they've been treating the PC version has practically made it the worst version to play. The mobile announcement is just throwing salt in the wound after nothing last year.

TBH this is the kind of thing I wanted to see Lav do before. 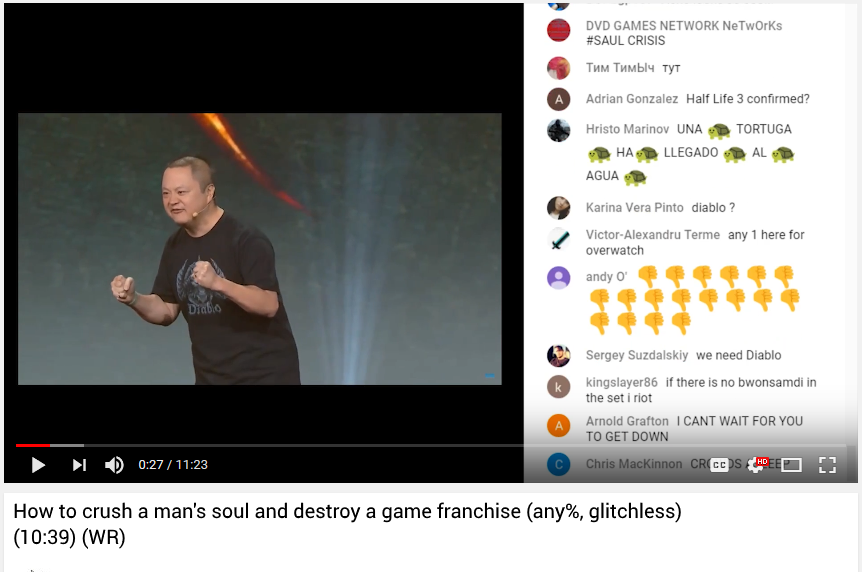 by IskatuMesk
I love how they're trying to censor the youtube videos and posting unlisted ones to hide the massive public backlash. The casuals have become woke and it's only downhill from here for their PR.

Diablo is far from the only disaster they've had at blizzcon, though. Really, it's probably the least disastrous thing they've done. The classic servers for WoW are a biblical trainwreck and the wc3 reboot is a sloppy prototype not even worthy of announcement much less prepurchase.

IskatuMesk wrote:I love how they're trying to censor the youtube videos and posting unlisted ones to hide the massive public backlash. The casuals have become woke and it's only downhill from here for their PR.

I wouldn't be surprised if the original Red Shirt Guy is embarrassed that people think he was the one who asked that question.

by UntamedLoli
It's basically what happens when you more or less ignore your user base for several years to then launch a mobile game and more console ports. I really don't know who though it was good idea to try deleting comments on a youtube video though.

by RazorclawX
That may be so, but I refuse to believe grown people who've been playing the franchise for 20+ years didn't ever grow up.

Thinking that behaving like this is okay is why so many things are messed up.

by wibod
"Don't you have phones? What are you, poor? Why don't you own an $800 phone to play our reskinned chinese microtransaction vehicle? What do you mean you don't want this? Why are you so shitlords so fucking entitled?"

D3 on PC continues to be the worst version and you've dropped at least $250 to go to Blizzcon, where a dev derides you for asking about a PC version of a franchise that is a cornerstone of the PC, at what has historically been a fairly PC focused convention. Can't imagine why people are mad.

Casuals are finally taking notice on what players and modders have been saying for years. All that said, they actually did show off something at blizzcon that was interesting - a rework of the female worgen that doesn't have the permasnarl. It took years upon years of false promises and bitching, but we finally have something that's halfway between the release and alpha version of the model being shown. Whether or not they don't mess it up again remains to be seen, but the fact they reigned in that disaster at all is worth mentioning.

by Hercanic
I just realized the acronym D:I doubles as an emoticon that expresses everyone's reaction to it.
All times are UTC-08:00
Page 1 of 1