you don't need to sub. The game is f2p. Just run heroic cataclysm raids a little bit and the money flows forever.

Zilla- wrote:This thread is going to make me resub. idk how i feel about that...

The calendar made me resubscribe earlier this year too. It's pretty dangerous.

"The children of Sul will protect their master."

Antu'sul was a troll shaman and member of the Sandfury tribe. He lived in Zul'Farrak, where he oversaw the care and breeding of his pet basilisks. He lived among his basilisks, and saw them as his family, feeling a stronger kinship with them than he did his fellow trolls.

One day, cruel adventurers came and attacked his poor defenceless basilisks. He went out to defend them, but the adventurers killed him too.
Top Magtheridon was a pit lord, and a former commander of the Burning Legion, and former Lord of Outland.

Following the destruction of Draenor as a result of Ner'zhul's reckless creation of portals, Kil'jaeden sent Magtheridon to the shattered ruins of the world to claim it for the Burning Legion. Making use of the dimensional gateways Ner'zhul had opened, he was able to quickly rally an army of demons and claimed the shattered world for himself. He rallied many of the surviving orcish tribes to his banner, and corrupting them further, causing them to transform into Fel Orcs. He claimed the ruined draenic city of Karabor, now known as the Black Temple and/or Black Citadel, to serve as his seat of power. With the bulk of the surviving orcs under his control, and a steady flow of reinforcements coming from the dimensional gateways, it seemed impossible that anyone would contest his control of Outland. His only opposition, after all, was nothing but a few scattered tribes of draenei, ogres, what few orcs escaped corruption, and maybe some flightless arakkoa.

"The might of Magtheridon cannot be denied! I am the Lord of Outland! Those who dispute my rule will soon regret their folly."

The situation changed considerably with the arrival of Illidan and his allies. With help from Prince Kael'thas' blood elves, and Lady Vashj's naga, and Akama's draenei survivors, Illidan was able to successfully overthrow the pit lord. After sealing the dimensional portals, and cutting off his reinforcements, the Illidari attacked the Black Temple, overcoming Magtheridon's defences and defeating the him in combat. He was presumed dead, but as it turned out Illidan found a use for the defeated pit lord.

Rather than killing Magtheridon, and potentially risking having the demon's spirit simply escape back into the Nether, Illidan instead imprisoned the pit lord beneath the ruins of Hellfire Citadel. Recognizing the usefulness of the Fel orcs Magtheridon had commanded, Illidan decided to use the pit lord to produce more them, and create a new Fel Horde, albiet one loyal to him instead of Magtheridon and the Burning Legion.

Things seemed to be going well at the newly refurbished Hellfire Citadel. The remnants of the long lost Alliance Expedition at Honor Hold put up a bit of a fuss, but they were hopelessly outnumbered and there was certainly no chance of them getting any sort of reinforcements from Azeroth. At least, that was the case until Lord Kazzak managed to reopen the Dark Portal, allowing the New Horde to establish themselves in the region, and letting the Alliance regain contact with their lost expedition. With fresh adventurers arriving through the portal daily, they soon stormed Hellfire Citadel, killing Keli'dan the Breaker, Magtheridon's chief jailor, and weakening the integrity of his prison.

While Keli'dan's death nearly resulted in Magtheridon breaking free of his prison, however the remaing warlocks of the Fel Horde were ultimately able to keep him contained. That is, until the naaru, A'dal, tasked adventurers with destroying the pit lord, and ending the threat of Illidan's Fel Horde once and for all. Adventurers did so, destroying the pit lord, passing A'dal's trials, and earning themselves the title of Champion of the Naaru. His head was brought to Honor Hold or Thrallmar, and presented to Danath Trollbane or Nazgrel, both of whom were happy to put it impale it on a spike and put it on display for all to see.

"This defeat is not only a blow to Illidan, <name>. The Legion too reels... A pit lord commander has been defeated."

Magtheridon's fate is unknown. As Outland is floating within the Twisting Nether, he is likely well and truly dead. As such, presumed dead, until proven otherwise.
Top

Thalraxal wrote:Magtheridon's fate is unknown. As Outland is floating within the Twisting Nether, he is likely well and truly dead. As such, presumed dead, until proven otherwise.

Outland being in the Twisting Nether apparently has no bearing on anything considering that a few notable other guys there are reappearing in Legion beside Illidan.

Thalraxal wrote:Magtheridon's fate is unknown. As Outland is floating within the Twisting Nether, he is likely well and truly dead. As such, presumed dead, until proven otherwise.

Outland being in the Twisting Nether apparently has no bearing on anything considering that a few notable other guys there are reappearing in Legion beside Illidan.

Yeah, plus we've had a few guys already return in Warlords, like Doomlord Kazzak and Ambassador Hellmaw, since apparently the Burning Legion invading Alternate Past Draenor is our modern day Burning Legion or something.

Grimlok, was king and chieftain of the Stonevault troggs. Grimlok maintained control of his tribe through strength, cunning, ruthlessness, and threatening to have dissidents turned to stone by his pet basilisk.

When dwarves dug into Uldaman, Grimlok was quick to have his troggs drive them out and overrun their dig site. Adventurers brought an end to his reign of terror, by killing him and his little pet basilisk too.
Top

"They must not reach the Slaughterhouse! Silence their beating hearts!"

That day, however, seems far away, however. Despite his long service in the Cult of the Damned, Maleki never seemed to have earned the Lich King's attention. Instead, he has been assigned to guard a Scourge ziggurat in Stratholme that helped to maintain a barrier protecting the Slaughterhouse, where Baron Rivendare resided.

"By the will of Ragnaros, I shall be reborn!"

Lord Incendius was a fire elemental noble, a loyal servant of Ragnaros and a pupil of Baron Geddon. Geddon had agreed to help train the younger fire elemental, and help him to master his destructive potential. Realizing that Incendius might actually be a threat to him, Geddon had Incendius sent to Shadowforge City, ostensibly to help their allies, the Dark Iron dwarves, but really because Geddon feared that Incendius would betray him and seek to take his position in Ragnaros' court by force.

In exile, Lord Incendius guarded the Black Anvil, a powerful magical anvil necessary to craft items made from dark iron. From this central location in Shadowforge City, he commanded all the other fire elementals dwelling there, including Overmaster Pyron, who guarded the entrance to Blackrock Depths within the Grinding Quarry. Incendius would periodically resurrect Pyron from his ashes, as he was frequently destroyed by adventurers.

Adventurers, seeking to destroy Pyron's master, or else make use of the Black Anvil, sought out and destroyed Lord Incendius, banishing him back to the Firelands.

Following the Cataclysm, and Ragnaros' return to Azeroth, Incendius was once again sent to Blackrock Depths where he continued to guard the Black Anvil, and aid the Dark Iron dwarves still loyal to Ragnaros and the Twilight Hammer's cultists who had also taken up residence there. Most adventurers prefer to use mole machines to traverse Blackrock Depths, resulting in most of them bypassing him completely. Furthermore, no one really uses the Black Anvil anymore, Dark Iron ore has become a lot more scarce and no one really needs that gear anyway. As a result, Lord Incendius is likely still there. 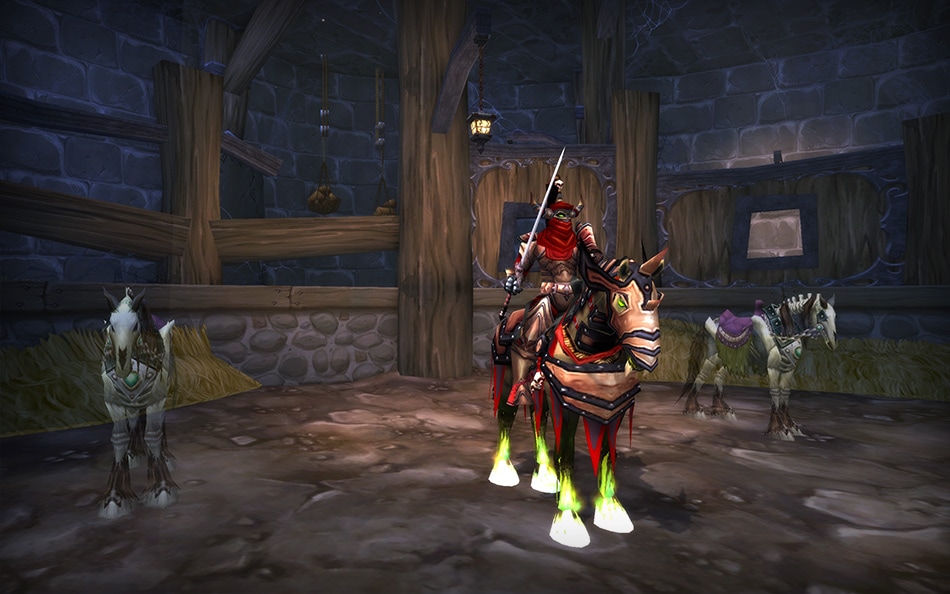 "Who dares attack the steed of the Huntsman?"

Attumen the Huntsman was a dude with a really sweet horse. Adventurers once tried to kill his horse. This made him angry. So he tried to kill them back. He failed, and they killed him. He once travelled to Dalaran and wished for a more comfortable saddle.

Little is actually known about Attumen the Huntsman. Who he is? What is he doing in Karazhan? Where did find Midnight, that sweet horse of his? No one knows. He might be one of the mysterious Black Riders of Karazhan, mysterious horsemen who are said to have been responsible for the corruption of Duskwood, and who were most recently seen searching that area for the Scythe of Elune; maybe he's a leftover death knight from the Second War, who took shelter in Karazhan following the defeat of the Orcish Horde; or maybe he was just a guy who liked hunting and got trapped in Karazhan one day.
Top

Black Riders are getting attention in Legion.

Yeah, I'm interested in seeing how Karazhan, and its many unresolved mysteries, returning to relevance will play out in Legion. Even if it's just a place for us to steal awesome magical weapons from, it'll be nice to see the old place again.

A horrifying howl can be heard echoing through the halls of Blackrock Spire. Something is very, very angry.

Gizrul the Slavener was a worg, and mate of Halycon. Together, their love made some of the biggest, meanest, most vicious worgs ever.

When adventurers stormed their den and killed Halycon, Gizrul arrived and attempted to avenge her death. His rage was futile, however, as he too was killed.
Top

"Who disturbs this sanctuary?'

Warp Splinter was destroyed by adventurers when they attempted to liberate the Botanica from the blood elves. A clipping was taken from him, and delivered to a night elf druidess from Darnassus who hoped to regrow Warp Splinter, free from corruption.
Top

"It is unwise to anger me!"

Dalliah the Doomsayer was a shivarran warrior, and loyal member of the Burning Legion. She possessed a reputation for being extremely aggressive and vicious on the battlefield, until she was captured by the naaru several millennia ago. She has since been stuck in a call on board the Arcatraz with Wrath-Scryer Soccothrates, a fellow demon, who she hates. Adventurers later freed her from her cell, and fought and defeated her. If Dalliah was released before Soccothrates, she would be quite happy to watch his demise, and would congratulate adventurers on their victory. Dying just made her angrier.
Top

"Thank you for freeing me. Now let me repay you by charring the flesh from your bones."

Pyroguard Emberseer was a fire elemental and a loyal minion of Ragnaros. He took part in a major battle between Ragnaros' forces, and the minions of Nefarian somewhere in the Burning Steppes, where he was captured and taken back to Blackrock Spire. There, he was held prisoner by several of the Blackrock Clan's warlocks, who would syphon his power to help incubate the eggs of the Black Dragonflight.

Adventurers killed the warlock's holding Emberseer prisoner. As a way of thanks, he then tried to kill the adventurers. He was destroyed by adventurers, and banished back to the Firelands.
Top

Electrocutioner 6000 was a powerful, super-charged mechano-tank armed with terrifying lightning guns. It was built and designed by Sicco Thermaplugg who may have not done the amount of safety testing one should when building a super-charged lightning wielding spider tank. It was piloted by the leper gnome, Tom “Sizzlepants” Crankle, its sole surviving pilot.