Well, here we are at the end of the year and the end of the calendar. What a long, strange trip it's been. I've had fun writing these up, and I hope others have enjoyed reading them. Without further ado, please, stay and enjoy this final entry. Once a paladin of the Silver Hand, Barthilas was later raised into undeath and forced to serve the Lich King.

Magistrate Barthilas was the mayor of Stratholme, and continued the serve in that capacity following his death and subsequent reanimation as a wight. In undeath, he would guard the city, and warn Baron Rivendare of intruders.

In life, Barthilas was a paladin and member of the Order of the Silver Hand. His parents were both killed during the Second War, and so Barthilas had trained to become a knight and paladin in order to avenge them. However, he only completed his training near the end of the war, and never saw combat. Following the war, he served under the command of Tirion Fordring at Merenholde Keep in Hearthglen. When Tirion was found injured, Barthilas assumed it was the act of an orcish raiding party, and scoured the countryside to find them. Additionally, he sent word to Saidan Dathrohan in Stratholme, requesting reinforcements. Together, they found one innocent orc, who they attempted to arrest. When Tirion intervened, he was instead arrested for treason.

With Tirion found guilty of treason and sent into exile, Barthilas was nominated to serve as regent of Merenholde Keep until Tiron's son, Taelan, came of age. When Taelon came of age, Barthilas left Merenholde and became the magistrate of Stratholme. As mayor of Stratholme, he struggled to maintain order and calm as rumours of plague spread through Lordaeron. He never realized that his own city had already been infected by the plagued grain coming out of Andorhal.

Bathilas was killed by Arthas when he purged the infected city. Ironically, as a paladin, Barthilas was immune to the effects of the plague of undeath, and thus was free of infection. Sadly, while paladins were immune to the plague of undeath, that did not mean they could not be raised from the dead by other means. The Scourge later claimed his corpse, and, curiously, chose to reanimated him as a wight, and not as a death knight. Perhaps Baron Rivendare didn't want to risk having him challenging his leadership of Stratholme, and so ensured that he was risen in a more obedient form, or maybe Baron Rivendare just didn't like him much when they were both alive.

Barthilas was defeated by agents of the Argent Dawn, whereupon his corpse returned to its original, unbloated form. With his defeat, Baron Rivendare considered finding someone else to replace Barthilas as mayor. One of the death knights of Archeus caught his attention during the battle of New Avalon in the Scarlet Enclave, but sadly they defected from the Scourge, making them ineligible for the position. With no other options available, Baron Rivendare reinstated Barthilas as mayor, and left him to help his son, Aurius, manage the city when he left to join The Four Horsemen. Barthilas was then destroyed once more by agents of the Argent Crusade when they attempted to reclaim the city.

"The soldiers are spreading panic with rumors of bad food. Neighbors are accusing one another of poison. The city will fall into bedlam!"

A still living Magistrate Barthilas was encountered by adventurers in the service of the Bronze Dragonflight when they were sent back in time to prevent the Infinite Dragonflight from assassinating Prince Arthas during the Culling of Stratholme. He was busy trying to figure out how to keep the city running as a mysterious illness claimed more and more of the city's population when Arthas showed up to torch the town.
Top

What kind of guy is that to end the Calendar on?

Barthilas could be attacked as he teleported to the end of the instance, and would aggro everything and charge back to the entrance.
Top

RazorclawX wrote:What kind of guy is that to end the Calendar on?

Yeah, Barthilas seems like an odd choice to end the year with. He's an interesting character, in that he's a relatively minor character in WoW who's played a much larger role in WarCraft's lore, but none of that is really discussed within the game itself. Heck, I didn't even know that he had been a paladin in life until I wrote up the entries for Saidan Dathrohan and Balnazzar.

I cant believe there are that many bosses, also, what am i going to do now? no more daily entries? somebody needs to get thal a new calendar
Top

It's been weird not having an entry to write up or post. After doing it for a full year (minus Sundays), it really becomes part of your daily routine.

There is a sequel to 2009's Year of Fear calendar: the 2010 page a day calendar, Year of Here, which instead depicts various locations around Azeroth (and presumably Outland). Could be interesting, but I don't think it's worth paying more than twelve bucks for a six year old, used, page a day calendar (even if it matches up with the current calendar year). As for getting a new 2016 calendar to follow, Blizzard seems to have stopped doing the page a day calendar thing, with the last one being the 2012 calendar. 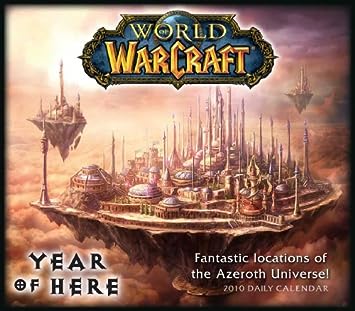